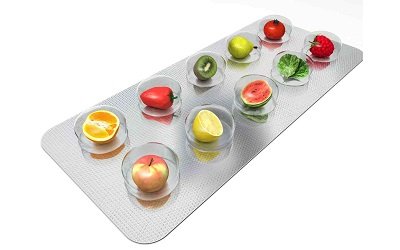 While conventional ingredients such as proteins, calcium, fibres and vitamins figure in the top selling list of nutraceuticals, niche ingredients – naturally derived substances, consisting of herbal and botanical extracts and animal- and marine-based derivatives are on fast growth path. The number of clinical studies confirming health benefits of nutraceutical ingredients, their applications in food, beverages, dietary supplements and nutritional preparations is increasing.

According to industry experts, increasing cost of medical care and rising trends of preventive medicine and self-treatment will impact favourably demand for numerous other natural extracts and derivatives such as plant sterols, lycopene and cranberry. Leading companies in nutraceuticals ingredients including BASF, Sami Direct and Naturex are investing resources in research and to prove beneficial effects of these ingredients in management of various diseases like cancer, obesity, cardiovascular diseases and urinary tract infection (UTI).

“Because plants do not synthesise Vitamin B12, individuals who consume diets completely free of animal products are at risk of Vitamin B12 deficiency. This is not true of lacto-ovo-vegetarians, who consume the vitamin in eggs, milk and other dairy products,” says Dr David Cai, senior regional manager, scientific marketing, regulatory and external affairs, BASF Asia.

“Plant sterols are safe and natural than statins – drugs used in weight loss. It is helpful for those with hyperlipidemia, for those who are on statins and need further reduction or experience side-effects. It is also helpful for healthy people who want to avoid cholesterol and CVD problems. Plant sterols give more favourable results when used in combination with appropriate exercise,” adds Dr Cai.

Lycopene for cancer
Lycopene is a bright red carotenoid which is obtained from Gac fruit. Gac fruit is the most abundant source of lycopene in nature. Lycopene is widely distributed in the human body. It is also found in various tissues in the body such as liver, kidney, adrenal gland, testes, ovaries and the prostate gland. Ageing, obesity, smoking, liver disorders, alcohol consumption are some lifestyle variables affecting lycopene concentration in the body.

“Lycopene can be used in nutraceuticals for cancer, benign prostate hyperplasia (BPH), cardiovascular support, osteoporosis, antioxidant, male infertility and skin health. Lycopene shows an anti-cancer activity. Cancer studies for lycopene have been carried out on breast, lung, stomach, bladder, cervical and oral cancer and lycopene has been found to be effective in all the studies,” says Dr Priti Vaidyanathan, senior manager, technical service, Sami Labs.

“The findings from epidemiological studies support the claim that higher blood or tissue levels of lycopene or higher intake of lycopene from dietary sources are beneficial in prevention of atherosclerosis and cardiovascular disease (CVD). High doses of lycopene (60 mg/day) have shown LDL-cholesterol lowering properties,” she adds.

Lycopene acts in its potent antioxidant capacity to decrease oxidative stress parameters and bone turnover markers and also reduce the risk of developing osteoporosis. Lycopene supplementation shows lowering of risk of osteoporosis in menopausal women. Lycopene is useful in management of idiopathic (unexplained) male infertility. It provides the nutricosmetic benefit to skin against UV rays.

Cranberry for UTI
Urinary tract infections (UTI) is among the most common type of infection in the body. According to US department of health, in USA alone there are about 8.3 million visits to doctors each year concerning UTI. One out of 2 women has probability to develop a UTI during their lifetime. One-third of them have high probability of recurrence of issues. Aging men are more susceptible to UTI. There may be a potential connection between prostate issues and UTIs.

However, many cranberry extracts available in the market fail to give the desired results. These extracts are mainly prepared from cranberry juice which is dried and milled to prepare an extract. A proprietary blend of the whole cranberry reengineered and optimised for specific health conditions is proved more efficient in clinical trials. In this process, the fruit is fractioned into skin, flesh, seeds and juice. All these parts are used to prepare the extract. Extract obtained thus makes it more effective in UTI and prostate health.

Alzheimer’s Disease (AD) is a progressive neurodegenerative disorder which is the most common cause of dementia in aged population. According to Prof Lucy Sun Hwang, Distinguished Professor Graduate Institute of Food Science and Technology, National Taiwan University, many plant bioactives were reported to have the potential of delaying the progress of AD. Among them, Gingko biloba was the most famous one. Tumeric has also been well documented to possess anti-AD effects with curcumin being the active component. Green tea catechins have neuroprotective actions towards AD by reducing Aβ mediated cognitive impairment. “Our laboratory has screened many plant bioactives by cell models. Z-ligustilide from Angelica sinensis, orientin from the seed embryo of lotus and tangeretin from citrus peel were all found to reduce the neurotoxicity caused by Aβ1-42 in PC 12 or primary neuron cell models. These plant bioactives have the potential for protection of cognitive deficits in AD,” Prof Lucy Sun Hwang added.

Prof Hwang said the leaf extract of Gingko biloba (EGb), labelled EGb 761, possesses the capacity to treat a variety of neurological disorders, including AD and age related dementia. EGb761 is a mixture of the flavone glycosides and terpene lactones. She also pointed out that EGb761 is mainly recommended for treatment of peripheral arterial diseases and for vascular. Gingko biloba leave extract has been reported to have effects on learning and memory processes as well as anti-aging effect in humans.

Daily oral dose of 240 mg EGb761 was reported to be effective on presenile and senile primary degenerative dementia of the Alzheimer type dementia. EGb leave extract can protect against the effects of neural damage, whether the neuroprotection is from a direct action on neurons or from an indirect effect from modulation of blood flow and antioxidant action is unclear. She further pointed out that researchers found that curcumin inhibits Aβ aggregation and it decreases the oxidative stress induced by Aβ. Curcmin also blocks toxicity of Aβ oligomer and improves behavioural impairment in AD rats. So curcumin may be one of the most promising compounds for the development of AD therapies. However, the beneficial effects in human AD need further confirmation.

Glucevia for prevention of diabetes
Impaired Glucose Tolerance (IGT) and Impaired Fasting Glycaemia (IFG) are risk categories for future development of Type 2 diabetes mellitus with concurrent fat accumulation leading to Non-Alcoholic Fatty Liver Disease (NAFLD) or cardiovascular disease (CVD). The global diabetes prevalence estimation would rise from 366 million in 2011 to 552 million in 2030 (Whiting et al., 2011). India leads the world in the number of diabetic subjects (around 41 million in 2006) and this is set to rise to 80 million by 2030 (World Health Organisation estimation). If no action is taken in the meantime, the diabetes mellitus ranking for leading causes of death will go from 11 (2002) to 7 (2030) (Mathers & Loncar, 2006). To prevent healthy population against diabetes and fatty liver, dietary intervention policy plans have been set, especially to manage Impaired Glucose Tolerance (IGT) and Impaired Fasting blood Glucose (IFG) stages.

In this context, Glucevia was first investigated to determine the potential benefits on postprandial glycemia in non-diabetic healthy individuals following glucose (50g) intake. A randomised, double blind, placebo controlled, crossover, acute study was conducted in India on 16 healthy volunteers and our findings have suggested that Glucevia causes an acute insulinotropic effect after a glucose challenge and therefore promotes insulin sensitivity (Visen et al., 2009).

Dr Issaly further pointed out that a second intervention study was carried out in 22 overweight/obese subjects (50-80 years-old, with an initial BMI 31 kg/m2 who followed a balanced covert energy-restricted diet for 7 weeks. The design was a longitudinal, randomised, crossover, and double-blinded nutritional intervention, with a one-week washout period between the 2 intervention periods of 3 weeks.

A concomitant improvement AST/ALT ratio observed between groups supports the potential hepatoprotective function of Glucevia which prevent hepatosteatosis in type 2 diabetes mice model. In summary, the administration of Glucevia may be beneficial in metabolic disturbances linked to impaired glucose tolerance, obesity, insulin resistance and inflammatory status, specifically in non-diabetic healthy and prediabetic segment of population.

Future is niche ingredients
Consumers are shifting their eating habits from hunger satisfaction to intake of healthy food in order to fulfil nutrient deficiency in the body or to prevent deficiency of major nutrients. This trend has increased demand for nutraceutical ingredients in food and beverages industry. Aging population in developed as well as developing economies and increasing probability of lifestyle and chronic diseases are growing health concerns among the minds of consumers. These major factors are pushing the nutraceutical ingredients market. Consumers need for solutions specifically created for their health conditions has motivated ingredient companies to invest in research and development of niche ingredients. With consumers becoming more aware of their health and nutrient needs, this trend will only grow in future.

Dietary and Nutrition Transitions in Indians, Processed Foods and Health