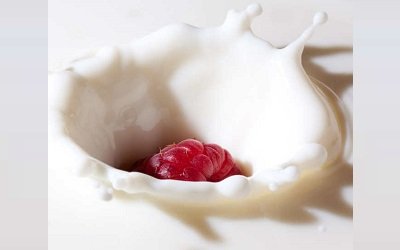 Probiotics defined by United Nation’s Food and Agriculture Organization (FAO) as live microorganisms, which, when administered in adequate amounts, confer a health benefit on the host. Though they have been in existence for many years, the proper appreciation of their benefits is only a recent phenomenon. More research has been undertaken to validate the efficacy of probiotics.

Till now, some of the research initiatives have showed effectiveness of probiotics in cases of antibiotic associated diarrhea, irritable bowel syndrome, lactose intolerance, oral health, etc. The past decade has been witness to launch of over 500 food and beverage probiotic products, which have garnered exceptional response in terms of acceptance.

According to a report published by Transparency Market Research, the probiotics market was valued at $11.16 billion in 2012, and is expected to reach $15.90 billion by 2019, growing at a compound annual growth rate (CAGR) of 5.2% from 2013 to 2019. However a report by Markets and Markets puts the probiotic products market at $26 billion in 2012. The global market for probiotics is expected to register a robust CAGR exceeding 7% during 2014-2020, according to Mordor Intelligence.

Probiotic food and beverages are the dominant segments and are expected to grow at a CAGR of 6.8% from 2013 to 2018. Probiotic demand for food and beverage segment is estimated to reach $37.9 billion in 2018. Following food and beverages, the market for dietary supplements and animal feed are also witnessing significant growth. With respect to application segments, probiotics are widely used in dairy, non-dairy, cereals, baked products, fermented meat products, dry foods and others.

Dairy products are the largest application market for probiotic food. Probiotic demand for dairy products is estimated to reach $32.2 billion in 2018, growing at a CAGR of 6.8% from 2013 to 2018. Probiotics have also emerged as a critical part of the animal feed industry as well. Probiotic demand for animal feed applications is estimated to cross $3 billion by 2018, according to Transparency Market Research.

The global market for probiotics is mainly driven by high demand for probiotic yogurt and growing consumption of functional food. Growing consumer awareness regarding gut health and aging baby boomer population have played a key role in sustained growth of these ingredients. The probiotic food and beverage segment accounts for over 84% of the overall probiotics market. Animal feed accounts for a small share of the global probiotics market, with the bulk of it being accounted for by human applications that include dietary supplements, functional foods and beverages and specialty nutrients.Asia-Pacific constitutes the largest global market for probiotics, estimated to corner a share of about 40% in 2014. The region has gained its dominant position in the field of probiotics as a consequence of high consumer awareness levels in regard to the benefits offered by probiotic yoghurts and fermented milk.

According to Transparency Market Research, the Asia-Pacific is the market leader for probiotics, with an expected CAGR of 7.0% from 2013 to 2018. Europe is another key consumer of probiotic products, with consumer awareness levels much higher than compared to North America; European probiotic demand is expected to grow at a CAGR of about 6.7% from 2013 to 2018.

In Asia-Pacific, China and Japan dominate the market revenue for probiotics, with India and other regions also showing significant growth. In Europe, Germany and UK are the most attractive markets, with expected CAGR of over 6% each from 2013 to 2018. The markets of North America and emerging countries such as Brazil also show huge potential for demand growth. 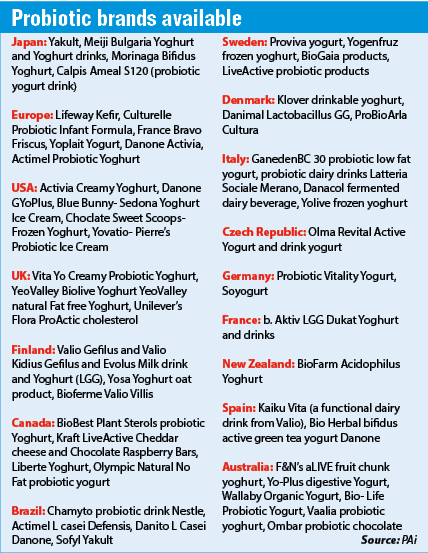 North American consumers are gradually adopting these products and this market is estimated to grow at a healthier rate in coming years. The biggest contributors to this market are supplements and specialty nutrients. Though the market base of probiotic products is comparatively lesser in the US in comparison to countries across the globe, the market is expected to grow at a promising rate in the same period driven by the large-scale acceptance of probiotic yogurts in spoonable single serve packs and probiotic cultured drinks in a single shot packaging form.

There are over 100 companies globally involved in manufacturing probiotics food and beverages. The companies enjoying significant market share in the global probiotics market include Yakult Honsha (Japan), Groupe Danone (France), Nestle SA (Switzerland), and Chr. Hansen (Denmark). Existing dominant players are leveraging their innovative capabilities and customer relations to commercialise novel products and increase their adoption. Top four players in the food encapsulation industry held a market share of around 60% signifying the participation of a large number of players in this market.

Ireland is one of the leading countries that pursues research in probiotics. Also, players such as Danone and Yakult heavily invest in R&D activities for probiotics. These two global players together established the Global Probiotics Council in 2004 to create awareness, develop new products, and collaborate with government bodies with regard to probiotics. Thus, increase in R&D activities is expected to open new avenues for the growth of global probiotic products market during the forecast period. 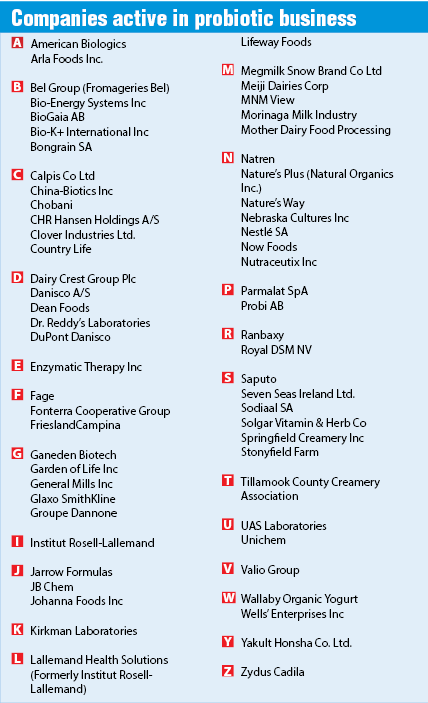 Increase in R&D has resulted in companies launching different kinds of probiotics products such as probiotic chocolates, probiotic ice creams, and probiotic baked products, which are expected to enjoy a larger market share. Consumers’ willingness to pay premium price for fortified products with proven benefits is a key driver for these segments. However, probiotic cheese, probiotic butter, etc. are fated to the status of ultra-niche products due to their conventional image as unhealthy dietary products.

Awareness about the benefits provided by probiotics to humans and animals is increasing, in turn creating a favorable demand for probiotic products. However, pricing issues, culture cultivation and lack of standardisation of product specifications are expected to have an inhibiting effect on market growth over the next five years. 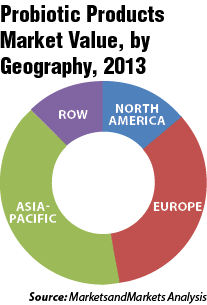 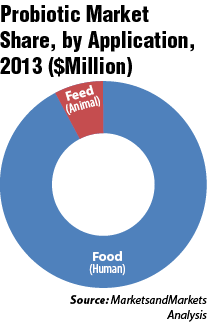 Knowledge dissemination is key to option in healthcare

Biotech in Food and Nutrition