Energy drinks are widely consumed by adolescents as these claim to improve performance, endurance and alertness. Looking at the contents in the energy drinks and their benefits, the industry may like to relook at what the consumers really need.

Increased urbanisation, rising disposable income and growing health consciousness among the Indian youth has increased the demand for non-carbonated drinks called energy drinks. At the same time long and erratic working hours and the increasing occurrence of social gatherings are driving Indian consumers towards consumption of energy drinks which are primarily classified as non-alcoholic, caffeinated beverages and sports drinks. Over the past few years, the sale of energy drinks has been driven by changing consumer lifestyle and increasing demand for alcohol mixers.

The market size of energy drinks in India is estimated at about Rs 700 crore, growing 20-25% year-on-year. The carbonated drinks market is close to Rs 6,000 crore and is growing by 10-12% annually, says a report. According to Euromonitor International, with changing lifestyles and increasing paucity of time, urban consumers are relying on energy drinks to cope up with fast paced lifestyles. Most of them would continue to use energy drinks to boost stamina and energy levels. However, it noted that the high price of energy drinks would restrict its growth in tier II and tier III cities.

Sharing his thoughts on the market trends for energy drinks in India, Dr H Prathap Kumar Shetty, Associate Professor and Head, Department of Food Science and Technology, Pondicherry University, Puducherry, said, “India is one of the fastest developing consumer markets, especially for a product targeted towards the young and as well as young adults, mostly belonging to upper middle class. They are ready to try new products as well as ready to spend some quick buck on so-called energy boosting products. Energy drinks are one of those category of products which has entered Indian market in the recent past and penetrated the shelves much faster than products like soft drinks and got accepted by the population even in small towns very quickly.”

“The energy drinks market in India is at a nascent stage and it has huge potential for growth. There are many players in the market including Vedantika Herbals,” added Narayan Limbasiya, Director, Vedantika Herbals, a herbal health products manufacturer and supplier from Rajkot.

Amway, a global player in health and nutrition space, too entered the Indian energy drinks market in 2008 by launching XL Energy Drinks but withdrew from the market after struggling to make its presence felt among consumers in 2012. Red Bull continued to enjoy the first mover advantage (entered in 2002) and long established presence across the country.

Looking at the growth in this niche space, many young entrepreneurs are venturing by launching new range of products targeting young Indian teenagers. In 2012 and 2013, JK Ansell (Raymond Group Company), Monster Energy Drink, and K G Functional Beverages introduced new range of products to tap the double-digit growth in energy drinks market. To add to this trend this year two companies – Bisleri International and Poorav Group – have introduced their energy drink brands in India.

Kolkata-based Poorav group, by partnering with Krungsiam Beverage Company, one of Thailand’s largest energy and fruit drinks companies, has launched its energy drink Commando in India in April this year. The product is made available at Rs 85 per 250 ml. The company claims Commando contains 45 gms of caffeine against other energy drinks that normally contain 80 gms of caffeine per 250 ml. To make up for the lower caffeine level, it added ’lysine’ — an amino acid produced in human bodies that acts as a catalyst for metabolism — to achieve a similar impact. The company is looking at a sales target of 1.2 lakh cans per day and to achieve this it is setting up a factory near Kolkata, with a capacity to produce 12 lakh cans of Commando.

A few months later, Bisleri International, a company that pioneered the concept of mineral water in India, announced its foray into the energy drink segment with launch of Urzza in the first week of September. It would be available in 250 ml cans and 300 ml PET bottles priced at Rs 50 each. Positioned as a liquid charger, Urzza is the first energy drink to be available in PET bottles in India. The company noted that Urzza does not contain caffeine but it is fortified with essential vitamins that help tired ones to bounce back with energy fit for all age group. The company, eyeing at a sales revenue of Rs 1,000 crore by 2015, has spent two years and put in a total investment of Rs 200 crore for developing and manufacturing Urzza. It will be manufactured at seven locations in the country, five at Bisleri’s own units and two at third party manufacturer, and distribute it through its existing network strength of over five lakh outlets.

While the market for energy drinks is expanding and is expected to grow further, the drink manufacturers have a challenge of supplying drinks that consumers feel are safe to consume as there has been a lot of talk ill effects on health of such drinks and health risks associated with them.

Energy drinks are widely consumed by adolescents as these claim to improve performance, endurance and alertness. In fact Dr H Prathap Kumar Shetty says he came across the common people like drivers take these products to keep awake during long hours on wheels!

Sharing his views, Ryan Fernando, Co-Founder, QUA Nutrition, said, “Today’s teenagers, new office-goers (who have sudden money and no parental restriction aged 21-27) are the major consumers of these cult brands of energy drinks. What’s worse to note is the trend of combining energy drinks with alcohol as it is gaining popularity with college students and young generation. This may be due to a misconception that caffeine counteracts alcohol; But it does not.”

“These drinks only help consumers who have not woken up to realise that if they are tired it’s because something is not right in their diet and fitness levels,” he warns.

“The energy drinks manufacturers have now shifted their focus from athletes – the primary target for energy drinks – to teenagers and young adults. According to an estimate, about 71% of adolescents in urban centers of India consume energy drinks. Despite the cost factor, youth do not mind spending money on energy drinks due to their much advertised perceived benefits on endurance, attention, and stamina,” noted Prof Piyush Gupta, University College of Medical Sciences and GTB Hospital, Delhi, in a study report published in Indian Pediatrics Journal (July 15, 2014).

The study report also noted that the energy drinks are non-alcoholic beverages containing stimulants like caffeine, herbal extracts (guarana, ginseng, yerba mate, ginkgobiloba), glucuronolactone, taurine, inositol, L-carnitine and B Vitamins as the main ingredients to enhance physical and mental endurance. In addition, these drinks may contain carbonated water. The report further noted that the caffeine content in energy drinks varies between 75 mg and 150 mg per can compared to 80-120 mg and 60 mg in a cup (250 ml) of coffee and tea, respectively. Maximum recommended intake of caffeine per day, varies from 2.5 mg/kg/day to 6 mg /kg/day in children, 100 mg/day in adolescents and up to 400 mg/day in adults. (1mg=4 ppm (parts per million)).

Nidhi Bedi from the Department of Pediatrics, Hamdard Institute of Medical Sciences and Research, Delhi, who authored the study report along with Pooja Dewan and Prof Piyush Gupta of University College of Medical Sciences and GTB Hospital, Delhi, pointed out that recent reports have shown that there are no real health benefits of these drinks. On the contrary, certain adverse effects due to energy drinks have come to the forefront, casting a question mark on their safety and utility.”

The World Health Organisation (WHO) study published in Frontiers in Public Health on October 14, 2014 also said the health risks associated with energy drink consumption are primarily related to their caffeine content. A caffeine overdose can cause palpitations, hypertension, dieresis, central nervous system stimulation, nausea, vomiting, marked hypocalcemia, metabolic acidosis, convulsions, and, in rare cases, even death. In adults, there is also an increased risk of arterial hypertension and Type 2 diabetes, as high consumption of caffeine reduces insulin sensitivity. High caffeine consumption among pregnant women increases the risk of late-miscarriages, small for gestational age infants, and still births. The WHO study also warns that consumption of energy drinks among adolescents is associated with other potentially negative health and behavioural outcomes such as sensation seeking, use of tobacco and other harmful substances, and binge drinking and is associated with a greater risk for depression and injuries that require medical treatment. The WHO study concludes by saying that the potential health risks related to heavy consumption of these products have largely gone unaddressed.

The energy drink manufacturers will have to evolve a strategy to overcome this challenge of gaining the consumers’ confidence that what they are consuming is safe.

It is a well-documented fact that many of the energy drinks have a very high content of sugar and caffeine that can make one feel fresh and energetic, and too much of caffeine can cause various manifestations of. However, Dr H Prathap Kumar Shetty said “when it comes to the direct health manifestations you read in the reports are concerned, it is very rarely someone can consume that much of an amount to cause some of the symptoms which are the immediate manifestations of the caffeine intake. Interestingly, caffeine from coffee has been found to be helpful in managing insulin resistance in short-term studies. Now coming to the long-term affects of caffeine especially the levels we are talking about in the energy drinks, it may be of some concern both from the point of view of caffeine as well as sugar, but there are no direct experimental evidences in this regard.”

Commenting on the high level of sugar and caffeine in the energy drinks, R Desikan, Chairman Emeritus, Consumers Association of India, who expressed concerns with the Food Safety & Standards Authority of India (FSSAI) on the standards for energy drinks that are not with the Indian scenario, said, “They damaged the health of children and even others in the US and Europe to some extent, as a part of junk food. I would go to the extent of accusing them for facilitating the change of taste appreciation of consumers, especially the young ones, which led the American youngster to become obese; later those who were obese and wanted to reduce obesity, had to resort to expensive physical exercises, over claimed obesity reducers, etc. In spite of that, huge number of people in USA and other Cola favourite countries have become obese leading to heart ailments, stomach diseases, cancer, etc.”

The Food Processing Industries Minister Harsimrat Kaur Badal, requested PepsiCo Chairman Indra Nooyi, who called on the minister in New Delhi on August 26, to further bring down the sugar content of soft drinks so that the health aspects of such products are duly taken care of. She also suggested that the company should bring out such new products in the market that are tasty as well as healthy and nutritious. Nooyi stressed that they would endeavour to provide products that are healthy and nutritious.

While opening India Food Park at Tumkur in Karnataka on September 24, Prime Minister Narendra Modi said he has asked multinational cola giants PepsiCo and Coca-Cola if they can put 5% natural juice in their drinks. “If they can, then our farmers will make a lot of money. Our farmers will not have to throw their fruit away,” he said.

The soft drinks industry, which is launching energy drinks, has to address the issues and concerns raised by WHO and other agencies. Otherwise the industry might face many challenges and hurdles. With huge investments coming from cola giants in the coming years, the Indian energy drinks market can witness launch of natural healthy nutrition drinks in the coming years. 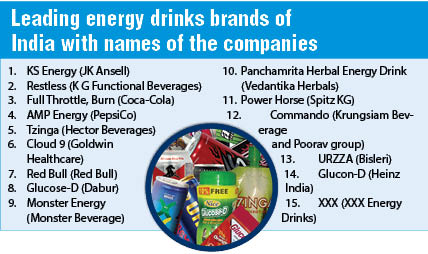 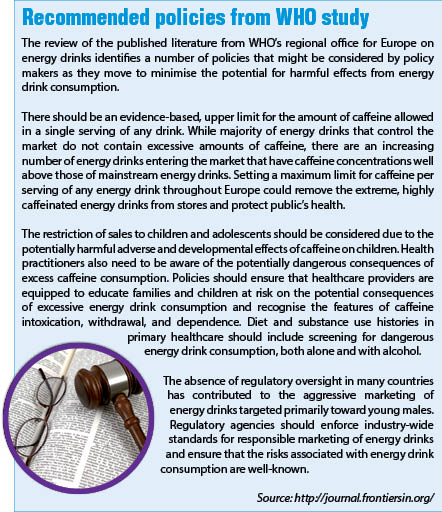