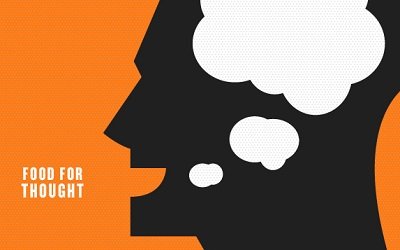 Do you feel hungry in stomach or in brain? For all of us may be hunger for thought is in brain, but for food surely it is in stomach. But, as all other functions and feelings of the body ultimately have their roots in brain, even hunger for food starts in brain.

Many researchers feel nutritional metabolism is also connected with our relationship with food. Due to this bond between food and thoughts, researchers say, food might help people to cope with negative feelings in the short-term. This bonding was described by Sufi poet Rumi, “The satiated man and the hungry man do not see the same thing when they look upon a loaf of bread.” No two people see the same thing or metabolize it the same way while looking at the same plate. Hence a lot of research is being done on food, brain and psychology.

The main direction of the researches is how to make people eat more, healthy, in time and pacing the two meals properly etc. University of Minnesota study found that photos of carrots and beans on a school lunch tray increased the amounts of vegetables eaten by children. The research also suggests that little changes to the lunchroom or methods help kids eat more vegetables. For instance, giving vegetables before any other food.

Ways are being investigated in University of California and Texas to motivate teenagers to choose healthier food and drink. The researchers are trying to link healthy eating to things the teenagers already care about. Penn State University College of Medicine research has established that irregular sleeping pattern among teens may affect their food consumption.

There is one research which is in opposite direction. Scientists have found out a way to control the hunger. They have identified a peptide and hormone that when administered to the brain may reduce the desire for food. They have also discovered how Pituitary Adenylate Cyclase-Activating Polypeptide (PACAP) decreases food intake when injected in the amygdala. By this method the intake can be decreased either by eating less quantity or eating less times in a day.

Such a research surely has advantages. Particularly in disease like obesity, or to a certain extent in diabetes, controlling food intake can help a lot in curing the disease or even preventing it in many cases. Psychology already plays important role in weight management as it addresses the behavior and thinking of a patient. But, many patient still fail. It is because though expert help is available ultimately people have to control their habits on their own, which is difficult for many. As against that the new research would guarantee the results as the person would surely eat less as a result of killing his hunger in brain itself. However, its adverse effects on health would also have to be checked and controlled.

But such types of research can be misused also. All experts are warning of the possible food shortage in future if farming techniques are not improved. In case of actual food shortage a tendency may develop to use this technic to make the people eat less ignoring the possible adverse effects. If that happens it would be a defeat of the purpose of such research. And that is the food for thought, though sound clichéd, for all right thinking people now itself to think as to how to prevent such possible misuse of a good research in future. Let the relationship between food, brain and psychology flourish, but not in this way.

’More students are enrolling for nutrition and dietetics courses’