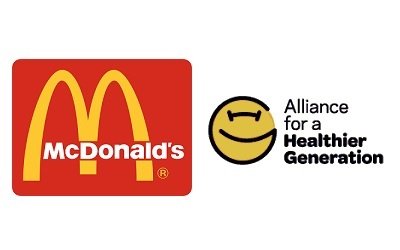 Through a partnership with the Alliance for a Healthier Generation, McDonald’s Corporation announced a global commitment to increase customers’ access to fruit and vegetables and help families and children make informed choices in keeping with balanced lifestyles at the 2013 Clinton Global Initiative Annual Meeting.

McDonald’s made five specific commitments in 20 major markets, including the U.S., representing more than 85% of the company’s global sales. The commitment spans through the year 2020 with interim goals in 2016 and 2018 and the final goal of fulfilling all commitments in all 20 markets by 2020.

Progress from the U.S. market includes:

• McDonald’s USA sold 21 million more low-fat and fat-free milk jugs and 100% apple juice boxes in the first 11 months in Happy Meals and ala carte after removing the listing of sodas on the Happy Meal section of menu boards compared to the same period a year earlier (July 2014 to May 2015).

• McDonald’s USA did not offer a fruit, vegetable or salad option as a substitute for French fries in Extra Value Meals in 2014, but did offer this alternative beginning in January 2015. An independent survey found that 83% of McDonald’s restaurants were offering this new option by February 2015.

• In 2014, 14 Happy Meal boxes and bags dedicated a panel to a fun nutrition or children’s well-being message, exceeding the four that were required in order to fulfill the commitment.

• In 2014, McDonald’s USA included fun nutrition or children’s well-being messages in 100% of its external advertisements directed to children.

“We’re making progress in areas that matter most to our customers, business and society,” said McDonald’s President and Chief Executive Officer Steve Easterbrook. “Our actions demonstrate the influence of our scale and the impact of our partnerships. We’ll continue to work with the Alliance for a Healthier Generation to offer more choices to our customers around the world.”

“The progress McDonald’s is making is a critical step in the right direction,” says Dr. Howell Wechsler, CEO of the Alliance for a Healthier Generation. “Any business practice that enhances the opportunity for families to make healthier choices is beneficial.”

McDonald’s is the world’s leading global foodservice retailer with over 36,000 locations serving approximately 69 million customers in over 100 countries each day. More than 80% of McDonald’s restaurants worldwide are owned and operated by independent local business men and women.

Keybridge, a public policy economic consulting firm based in Washington, D.C., released the first annual report on McDonald’s progress. The company retained Keybridge to independently verify progress on these commitments in a clear and transparent manner. The verification effort was piloted in the U.S. and Italy and indicates that both markets are well-positioned to meet all of the commitments by 2020.

’Government should offer concessions to set up industries’