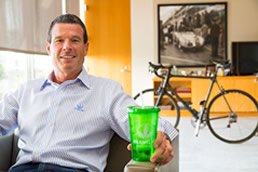 Mr. Johnson will oversee the operations of the Company, along with other senior executives, and continue to drive Herbalife Nutrition’s strong performance and growth trajectory.

Mr. Johnson will oversee the operations of the Company, along with other senior executives, and continue to drive Herbalife Nutrition’s strong performance and growth trajectory. Pursuant to the Board’s succession plan, and to ensure an effective and orderly transition to a permanent CEO in the future, the Board expects to select the permanent CEO from the Company’s proven senior leadership team.

Mr. Goudis’ departure is not due to any issues regarding the Company’s financial reporting, but pertains to comments which recently came to light, made by Mr. Goudis prior to his role as CEO, that are contrary to the Company’s expense-related policies and business practices. The comments made were inconsistent with Herbalife Nutrition’s standards and do not reflect the Company’s culture.

The Company has also announced preliminary volume point results for the fourth quarter 2018 which were up 11.6% worldwide from the same period in 2017(1)( 2) and reaffirmed its initial full year 2019 guidance as announced on October 30, 2018, thereby demonstrating the Company’s consistent and continued confidence in the business moving forward.

(1) During 2018, the Company adjusted volume point values for certain products in Mexico, North America and South & Central America. Excluding these adjustments, the worldwide total year over year change in volume points would have been an increase of 10.8%.

(2) The volume point results are preliminary and may be subject to revision based upon the completion of the Company’s year-end financial closing process. The Company expects to report its final volume point results, as well as its financial results for the fourth quarter and full year 2018 and provide an update to 2019 guidance, on February 19, 2019.