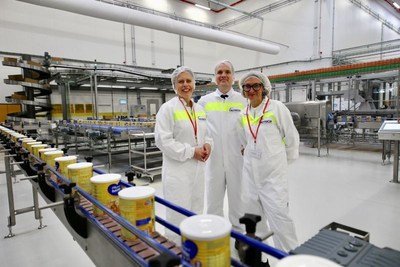 Danone has announced the official opening of its new Nutricia Cuijk production facility. The opening ceremony, taking place in the presence of a broad range of stakeholders, including the Minister of Agriculture, Nature and Food Quality, Carola Schouten, as well as industry and healthcare representatives, marks the completion of a three-year journey to build a state-of-the-art, energy-efficient, zero-waste plant.

The facility will primarily produce specialized infant formula that meets the needs of infants diagnosed with specific medical conditions – such as cow’s milk protein allergy, as well as standard infant formula. The €240 million investment is among Danone’s largest in its European production network in the last ten years.

Veronique Penchienati -Bosetta, Executive Vice President, Danone Specialized Nutrition said, “At Danone, we believe the health of people and the planet are interconnected, as expressed through our company vision ‘One Planet. One Health’. Our new Nutricia Cuijk facility is a significant investment towards achieving that vision. At this facility, we’ll be producing food for vulnerable babies; and we’re also doing everything we can to preserve a healthy and clean environment for future generations.”

“Producing such highly specialized infant formula, our new facility builds on the scientific heritage of Nutricia, coupled with the latest green technologies. Today’s opening ceremony marks the next chapter for Nutricia Cuijk – here in the Netherlands, and as part of the Danone family,” Penchienati -Bosetta added.

The new Nutricia Cuijk facility will replace an older, existing plant in Cuijk, which the company will gradually phase out.