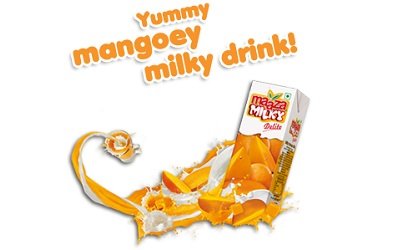 Coca-Cola India, one of the country’s leading beverage companies, offering a range of healthy, safe, high quality, refreshing beverage options to consumers, mixes the freshness of mango with the richness of milk solids in its new innovation, Maaza Milky Delite. The product seeks to expand Maaza’s range of mango offerings and provide more choice to the mango lover with new and unique ways of enjoying their favourite fruit.

The new product will be available in 200 ml TetraPak at a price of Rs 25. The latest innovation by Coca-Cola India is targeted at consumers across all age groups offering them a delicious and yummy twist to your favourite mango drink. The mango pulp for Maaza Milky Delite will be procured locally from Jain Irrigation Ltd. The reconstituted milk is being sourced from different suppliers in the country.

Maaza Milky Delite has been developed specifically for the Indian palette at Coca-Cola India’s R&D center in Gurgaon. With the launch of this product in Punjab, consumers now have a wider choice of Coca-Cola products spanning from Minute Maid range of juices to Maaza and from Limca to Thums Up and Coca-Cola in the sparkling segment. The product was launched by Neeraj Garg, Vice President, Juices, Coca-Cola India and Ashish Sethi, CEO, Kandhari Beverages, an authorized franchise bottler of The Coca-Cola Company in Punjab, India.

Launching the new product, Neeraj Garg, said, “Maaza Milky Delite brings to consumers a distinct offering that builds on the great taste of Maaza and combines it with the richness of milk solids. This combination has been a part of Indian households for many years. What we now bring to the market is this amazing fusion of mango and milk as a standardized, safe, hygienic and consistent offering. This also adds to our existing portfolio of world class products thereby offering more hydration and nourishment choices to our consumers.

In his message celebrating the launch of Maaza Milky Delite, Asim Parekh, Vice President, Technical and Supply Chain, Coca-Cola India and South West Asia, said, “This journey has begun in Punjab and hopefully we will be able to scale it to other parts of the country shortly.”

Coca-Cola India’s Maaza is the market leader in the juice drink segment. With the launch of Maaza Milky Delite, Coca-Cola India expects consumers to give this the same patronage as they have given to Maaza over the last 38 years.