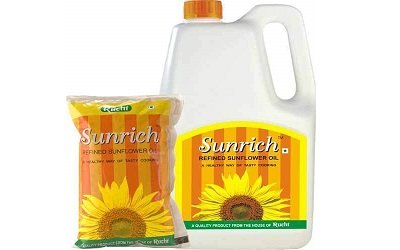 The Sunrich brand is produced by Ruchi Soya Industries Limited, one of India’s leading FMCG companies as well as the largest manufacturer of edible oils. Sunrich refined sunflower oil was relaunched last year with a new pack and proposition of “Clearer, Lighter, Healthier”. Popular South Indian actress Priyanka Upendra is the brand ambassador for Sunrich.

Sunflower oil market in India has been growing well owing to high growth of income levels, increasing trend towards spending, better living standards and growing health consciousness among Indian consumers. The current sunflower oil market in India is over Rs 180 Billion of which 60-65% is contributed by South India. This is expected to grow with a CAGR of around 10% during 2014-15 to 2016-17.

Commenting on the success, Dinesh Shahra – Managing Director, Ruchi Soya Industries Limited, said “Ruchi Soya has been offering healthy and nutritious products to Indian families for over three decades now and continues to be one of India’s most trusted and popular providers of edible oils. Our brands represent not just an ‘assurance’ of quality but also a set of values that are inspired by vision for holistic development of all stakeholders. We want to make Sunrich a preferred brand among Indian families by providing them unbeatable value and a best in class product at a best in class price. We are on the right track and the numbers clearly shows that the consumers are realizing the value offered by Sunrich and are accepting it.”

Satendra Aggarwal – COO, Ruchi Soya Industries Limited, said “Our vision for Sunrich is to make it the largest sunflower oil brand in the country in the next three years. We had relaunched Sunrich last year based on comprehensive consumer research and the numbers indicate that we have hit the right spot. We intend to take our share for Sunrich in the sunflower oil category to 15% in next 2-3 years. In order, to achieve this we have planned both ATL and BTL marketing initiatives and are looking at doubling our distribution footprint for the brand.”

Ajay Malik – Business Head (South Hub) of Ruchi Soya Industries Limited, said “We have been able to achieve this feat because of our team along with the support of our channel partners. We have focused on increasing the availability of Sunrich in the market through town development plans because of which our distribution footprint has increased significantly. We have launched attractive consumer schemes to engage with our consumers. Our belief is that once the consumer tries new Sunrich – a superior option to ordinary sunflower oils available in the market – he/she will get hooked to the brand.”

Sunrich refined sunflower oil is ‘Clearer, Lighter, Healthier’ as it is refined through a unique 7-stage refining process so that it eliminates most impurities. Sunrich contains Vitamins A, D & E. Cuisines and food cooked in Sunrich absorbs up to 15% less oil (compared to other ordinary sunflower oils).

Sunrich refined sunflower oil is available in 500ml, 1 Litre, 2 Litre pouches and 5 Litre jars and even 15 Litre bulk pack both jars and tins and is available across all grocers, neighborhood kirana stores and general stores. It is also available across modern retail chains, supermarkets and standalone self-service stores.