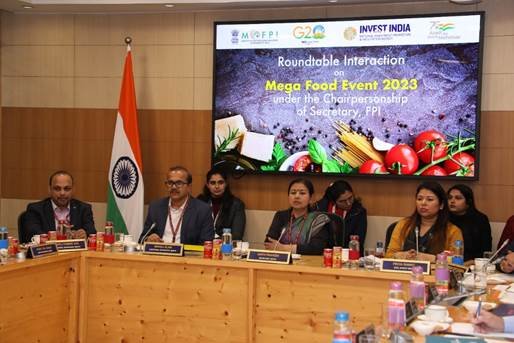 It was earlier declared that the event would be taking place between 16 and 18 October, 2023 in New Delhi. But the Secretary, MoFPI in her keynote address highlighted that the Ministry is now organising the Mega Food Event from 3rd to 5th November 2023, which is being envisaged on a much larger scale than the event earlier organised by the Ministry in 2017.

She stated that the event would cater to all subsegments of food processing and allied sectors. In addition to this, the event will also focus on promoting millets and millet-based value-added products as 2023 has been declared as the ‘International Year of Millets’. Secretary, MoFPI further added that through the event, the Ministry envisages to showcase India as a global food supply hub.

The Investment Facilitation Cell (Invest India) has been directed to connect with all the participants to share further information about the mega event as well as explore areas of collaborations.